How Was They Able To Invade Capital Hill? 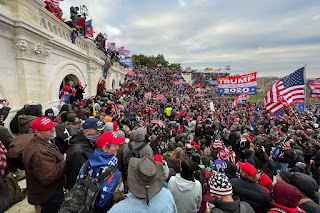 Will someone please explain to me how protestors were able to gain entry into Capital Hill? This is like saying any country could come here and take over all power. This shows weakness to America.

Rioters with Donald Trump and soviet flags stormed the U.S. Capitol Building while Congress met to certify electoral. Among that, Donald Trump our President was inciting the invasion of the US Capitol with his own Vice President inside.

President-elect Joe Biden also expressed his belief that had the crowds of men dressed in face paint and protective riot gear storming the Capitol been BLM supporters, the response by law enforcement would have looked differently.

"No one can tell me that if it had been a group of Black Lives Matter protesting yesterday, they wouldn't have been treated very, very differently than the mob of thugs that stormed the Capitol. We all know that's true, and it is unacceptable," Biden said in a Thursday address.  "Totally unacceptable."

Rioters made it into the House Chambers, where US politicians had to be evacuated, and also into the offices of some officials.

So how did they get past heavily guarded police and into the building? Videos posted online also showed protesters fighting with Capitol police officers as police fired pepper spray to keep them back. But some protesters brought a dispersing spray of their own. Many were also seen wearing gas masks and protective helmets.

Crowd antics ramped up when people began storming police lines on Capitol Hill and smashing windows. In one video a protester is seen smashing a window with what appears to be a police shield.

Crowds gathered to ambush entrances of the building, pushing guards out of the way. Others dispersed around the front of the Capitol and some climbed scaffolding and banged on windows. They shoved into the Capitol's corridors and quickly made their way up multiple levels of the building and into the Senate chambers.

Capitol police seemed to be outnumbered. The White House said National Guard troops along with other federal protective services were sent the Capitol to help end the violent occupation. Armed FBI agents were also seen wearing bullet-proof vests on the streets of Washington.

One woman was shot and died, but it remains unclear how the incident unfolded. Despite the police presence inside, a protester made it into the office of House speaker, Nancy Pelosi. One man managed to sit at her desk and rest his feet on it. The same man also made it back outside the Capitol building.

Protesters eventually entered the House Chamber and posed in front of the Speaker's chair while holding American flags. Some protesters walked freely out of the building observed closely by guards.