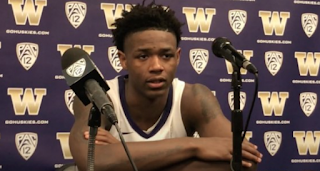 The University of Washington has suspended its star guard on the basketball team due to two sexual assault allegations against him. With his last name being Carter, he won’t be the only one facing backlash for these accusations.

21-year-old Nahziah Carter, who is the nephew of Hip Hop/pop culture icon Jay-Z, violated UW’s school policy on sexual assault and his suspension has been upheld following his appeal. Carter was suspended indefinitely in October for the first accusation and received a suspension for the winter and spring quarters after the second investigation concluded.

Two women accuse Carter of forcing them to perform oral sex on him and one of his accusers even posted the findings of the investigation once it was public information.

“We as the victims, feel that the University has failed to act in a way that protects and supports us,” the student tweeted. “They also failed to notify the public of his behavior, neglecting to protect future victims and victims who never had a chance to seek justice.”

Carter is currently ranked 87th among the NBA prospects for the upcoming draft.

Posted by Jessithapromoter at 12:25 AM