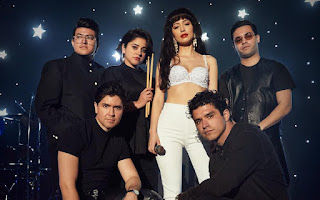 Jennifer Lopez, who played Selena Quintanilla-Pérez in a 1997 movie, said she was "so excited" when she heard about the new Netflix series. Jennifer Lopez is reflecting on her breakout film role in Selena as she passes the baton to a new cast bringing the late singer's life to the small screen.

On Tuesday, the Instagram account for the upcoming Netflix drama Selena: The Series, which gives fans a closer look at the life of Selena Quintanilla-Pérez, posted a special video of Lopez expressing her excitement for the new series.

"Guys, I don't know if you've heard about this new Selena series on Netflix," Lopez, who portrayed Quintanilla-Pérez in the 1997 film, began the clip. "Playing Selena was kind of a landmark moment in my career. And I was so excited when I saw the trailer and heard about it."

Lopez, 51, said she believes the two-part series will be a "great way for this generation to get to know Selena."

"I love Selena, she was such a big part of my life and my career," she continued. "And I can't wait to see it!"

Netflix made sure to honor Lopez for her iconic portrayal of Quintanilla-Pérez, captioning the video, "We love you, @jlo 👑."

In the trailer, Quintanilla-Pérez discovers the power of her voice as she navigates life, fame, and love — all while becoming the most successful female Latin artist of all time.

"If you stand around and wait for what you want, you're going to be waiting your whole life," her father, played by Ricardo Chavira, tells her. "You have to go and get it."

The show, set to premiere in December, will be split into two parts with part one featuring six hour-long episodes. The cast also includes Gabriel Chavarria, Noemí Gonzalez and Seidy López.

Selena: The Series is the latest account of the legendary superstar's life and eventual death in 1995. She was murdered in a motel in her hometown of Corpus Christi, Texas, by Yolanda Saldívar, her fan club's president.

The Quintanilla family worked with creator and executive producer Moisés Zamora to develop the series.

"Before she became the Queen of Tejano Music, Selena Quintanilla was a young girl from Texas with big dreams and an even bigger voice," the logline reads. "The two-part coming-of-age drama Selena: The Series explores the once-in-a-generation performer's journey as a young artist, from singing small gigs in Corpus Christi with her family to becoming one of the most successful Latin artists of all time — and the years of grit and sacrifice the Quintanilla family navigated together before Selena's meteoric rise to fame."

Part one of Selena: The Series hits Netflix on Dec. 4.

Posted by Jessithapromoter at 3:39 AM