Lil Wayne Talks Which Jay-Z Album Was Most Influential 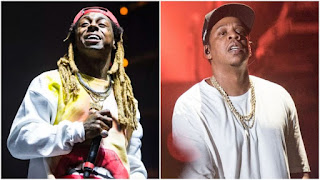 Wayne has apparently been a fan of Jay-Z’s for a long time and even credits the rapper for influencing his career. In a recent conversation with Lil Baby, Wayne reveals which Jay-Z album influenced his music the most.

Wayne sat down for a chat with Lil Baby as part of Rolling Stone‘s Musicians On Musicians interview series. Throughout the conversation, Wayne opens up about some of his musical influences and named Hov’s fourth studio album as his biggest inspiration:

“Jay-Z, Life And Times Of Shawn Carter, plain and simple. It was the first album where I actually [bought] the car that the rapper was talking about. That was my album. […] Also, Jay talked so crazy. He went bananas on that album. I got lyrics from the album tattooed on me and sh*t. I have songs that are remakes of spinoffs of songs from that album.”

Lil Wayne is a rapper's rapper, one who understands the importance of proper craftsmanship -- it's part of the reason why he remains such a viable "best rapper alive" contender to this day. In reality, Weezy's impressive skillset is the direct result of decades of experience, the culmination of a journey that originally began in his teenage years. During an interview with Lil Baby for Rolling Stone's Musicians On Musicians series, Weezy actually opened up about some of the albums that shaped him into the emcee he is today.

The third volume of Jay-Z's iconic series, Life & Times boasts classic cuts like "Big Pimpin," "Dope Man," "Watch Me," "So Ghetto" and more. Originally released in December of 1999, Lil Wayne would have been around seventeen years old upon its release. At that point, he had recently dropped his own debut album The Block Is Hot, not to mention various works with the Hot Boys and the Big Tymers. It's interesting to hear that the Jigga Man's Vol 3 had such a profound impact on a young Weezy, making their eventual collaborations like "Hello Brooklyn" and the stacked "Swagga Like Us" all the more historic.

Posted by Jessithapromoter at 3:17 AM