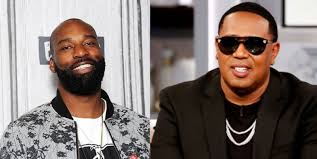 The rapper Master P and former NBA All-Star Baron Davis have jointly entered into negotiations with parent company Adidas to acquire the once-mighty shoe brand Reebok, which is reportedly on sale for some $2.4billion.

Master P is the stage name of Percy Robert Miller, a 53-year-old rapper, actor, record producer, and entrepreneur whose net worth is said to be valued at $200million.

He currently works as a studio analyst for Turner Network Television's coverage of the NBA. In his post-playing days, Davis has branched out to acting in films and television shows. He has also started up his own business selling clothing. Reebok, the once-popular shoe brand, has had difficulty competing with the likes of Nike and New Balance.

"These companies have been benefiting off us, this could be history for this company going Black-owned," Miller tells ESPN.

Posted by Jessithapromoter at 3:40 AM