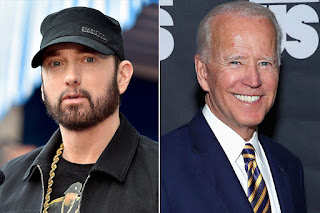 "Look/ If you had/ One shot/ Or one opportunity/ To seize everything you ever wanted/ In one moment/ Would you capture it/ Or just let it slip?" Em raps at the top of the iconic 2002 anthem from his Oscar-winning film 8 Mile, a track that has become one of the go-to soundtracks for overcoming any challenge in the years since. In this case, the aim is to turn out the vote for Biden during Tuesday's (Nov. 3) election in a historic campaign that currently has the former veep leading Trump by 8 points nationally, as well as by large double-digit margins among Black voters, seniors, women and independents, and holding on to leads in key swing states Arizona, Florida, Pennsylvania and Wisconsin.

Posted by Gansta Marcus at 9:37 PM