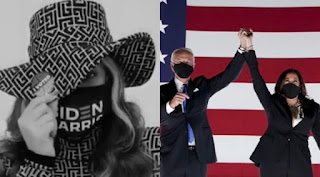 Beyoncé officially declared her support for Joe Biden and Kamala Harris on Instagram on Monday, a day before the 2020 election.

The pop star posted a Boomerang clip of herself in a head-to-toe Balmain ensemble with a Biden and Harris mask and “I voted” sticker — which she placed atop her hat.

“Come thru, Texas! #vote,” wrote the singer, a shout-out to her home state, which is one of a handful of critical swing states that could help determine the election.

The 39-year-old, who has 155 million followers, also shared a get-out-the-vote post, in which she encouraged people voting with absentee ballots to drop them in a ballot box rather than a mailbox to ensure that they’re counted.

This isn’t the first time Beyoncé has thrown her support behind a presidential candidate.

The singer and her husband, Jay-Z, spoke out in support of Hillary Clinton in 2016 at an event in Ohio, where she performed and paid homage to the politician in a sharp matching pantsuit.

The Houston-born songstress was criticized in 2018 for her 11th-hour endorsement of Senate hopeful Beto O’Rourke, with some even blaming her for the Texas Democrat’s loss to Sen. Ted Cruz.

Posted by Gansta Marcus at 9:15 PM