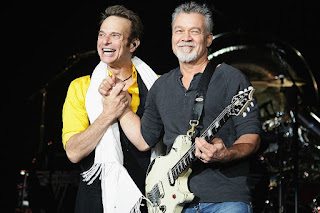 David Lee Roth has revealed a lofty, acoustic guitar-driven new track that he has dedicated to his longtime bandmate Eddie Van Halen.

"Somewhere Over the Rainbow Bar and Grill..." was one of a number of previously-unreleased songs written and recorded by Roth and John 5 circa 2014, with Greg Bissonette playing drums.

Almost a month since Eddie's death, Roth was apparently moved to release the sentimental feeling track along with a message to his longtime collaborator and frenemy embedded in the artwork, "Hey Ed, I'm gonna miss ya'. See you on the other side..."

The statement is the most direct one Roth has yet made to Eddie's passing. It mirrors Alex Van Halen's own brief message to his brother and bandmate in the wake of his death.

Roth previously shared a pair of photos depicting himself and Eddie smiling together backstage. Both photos were accompanied by the same caption, "What a Long Great Trip It’s Been.."⠀

The Van Halens and Roth had a famously rocky relationship over the years, but put their differences aside to reunite in 2006 and remain aligned through the final Van Halen tour in 2015.

When plans to get the band back together in 2019 fell through due to Eddie's health, Roth relaunched his dormant solo career with the goal of care-taking the Van Halen legacy.

Roth hopes to get back on tour with his solo band supporting Kiss in 2021 if the pandemic situation allows.

Posted by Gansta Marcus at 9:46 AM