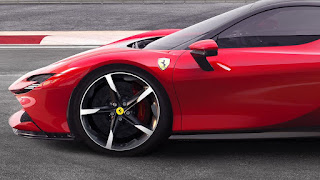 Ferrari, one of the last bastions of petrol supremacy, has turned the corner on electrical motorvation and has giveth the sports car world a stunning plug-in hybrid supercar.

The new SF90 Stradale does indeed feature an obligatory turbo-charged V8 for its primary power source, but a 7.9kWh lithium-ion battery and three electric motors are also along for the ride, and will give owners of the sleek new machine an until now very un-Ferrari experience: over 20 miles of driving in all-electric silence. 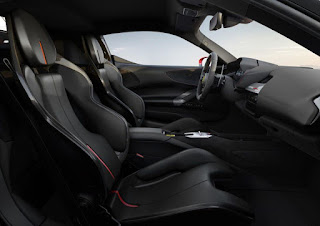 The SF90 also isn't the first hybrid supercar by any stretch, with Porsche's 918 and the Koenigsegg Regera going electric at some level first. But it is a true first for Ferrari and without a doubt a harbinger of cars to come.

While the SF90 will feature the latest in gear-changing tech with a dual-clutch 8-speed gearbox, there's not going to be a mechanical reverse gear; that chore will be handled by the electric motors. Saves weight and simplifies things, according to Ferrari.

The car will also feature a new slate of multiple drive modes including the aforementioned electric only, along with a hybrid "eco" mode, and a full-power mode. The traditional red toggle ride mode selector is present on the steering wheel and Ferrari has even paid homage to the hallowed gated shifter with a central set of control switches set in the familiar pattern. 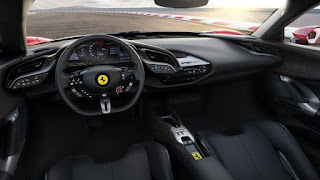 Inside, the SF90 appears to be a comfortable spot to command all that power, and the cockpit is festooned with touch screens for all manner of duties, including both a highly configurable 16-inch command center behind the wheel and a Head-Up Display (HUD) that projects pertinent information into the windshield.

The SF90's exterior design is striking and softly geometric, and from above, the rear section somewhat (ironically) recalls the Ford GT's split "wing" design.

Price? Not specified just yet but seeing as how this will be their halo car and it's packed with every new technology Ferrari can muster, a seven-digit number is not out of the question. But think of how much you'll save on gas! 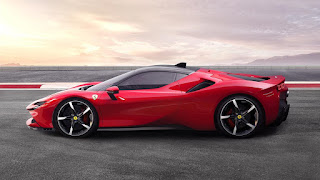 Posted by DJ Sippitakeover at 1:48 PM