What's Your #FavoriteSong By Kendrick Lamar? 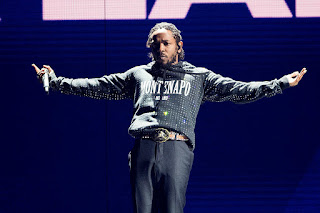 Since his mainstream debut in 2012, Kendrick Lamar has been regarded as one of the most influential artists of his generation, as well as one of the greatest rappers and lyricists of all time.

Raised in Compton, California, Lamar embarked on his musical career as a teenager under the stage name K-Dot, releasing a mixtape that garnered local attention and led to his signing with indie record label Top Dawg Entertainment.

Kendrick Lamar has received many accolades over the course of his career, including 13 Grammy Awards, two American Music Awards, five Billboard Music Awards, a Brit Award, 11 MTV Video Music Awards, a Pulitzer Prize, and an Academy Award nomination. In 2012, MTV named him the Hottest MC in the Game on their annual list.

Now the Wrap-Up Magazine want to know what if music fans favorite selection from Kendrick Lamar? Name the first song that comes to mind when you mention Kendrick Lamar.

Lamar's biggest hit to date is “HUMBLE.,” the lead single from DAMN. The track reached number one on Billboard's Hot 100 in April 2017, and it stayed there for five weeks before being dethroned.

Posted by Jessithapromoter at 6:44 PM