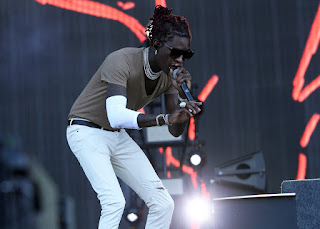 Young Thug was talking with Gillie Da Kid on the latter’s ‎Million Dollaz Worth Of Game podcast and the Atlanta rapper proceeded to jump out the window, figuratively. While bragging that he had 30 songs that would make the crowd go crazy at his shows in arenas, he then proceeded to add that “Jay-Z ain’t got 30 songs like that.”

Now Thugger said that with the utmost confidence. But the look on Gillie’s face said it all. But to be clear, the Philly rapper turned host also diplomatically added, “He got a lot, though.”

The tone, or maybe his thoughts catching up with what he just said, led Thug to walk back that wild statement instantaneously.

“I’m just saying like, I know he do, he probably got 50 of them b*tch,” said Thug, now in full retreat mode. “I”m not literally saying him. I’m saying n*ggas who you thinking…”

Right. The subject then changed to how much Thug gets for a show and he claimed a million, and that’s actually down on his price due to the pandemic. Okay. Could be some capping going on—we’ll wait on the receipts—but will give him credit for at least try to clean up that Jay-Z ain’t got 30 songs idea right way.

Just so we’re clear, Jay-Z has had entire concerts that were rocking off the strength of his b-sides and album cuts that easily could be translated to arenas. Then when you get to his mainstream hits, forget about it.

With 13 studio albums dating back to 1996, Hov has amassed an arsenal of not only Billboard hits but also celebrated B-sides. Not to mention, he’s sold over 29,179,000 studio albums as of December 2014.

Meanwhile, Young Thug has dropped one solo studio album — the platinum-selling So Much Fun — three EPs and 19 mixtapes. Of those 19 mixtapes, seven of them have charted on the Billboard 200. 2016’s Jeffery peaked at No. 8 and his Super Slimey collaboration with Future landed at No. 2, his highest chart position to date.

Thugger has faired much better on the Billboard Hot 100. Thirty of his songs either as a featured or lead artist have been certified at least gold by the Recording Industry Industry of America (RIAA). His collaboration with Camila Cabello, “Havana,” was certified 9x-platinum in 2017.

Although Thug attempted to correct his latest feux pas (don’t forget about those André 3000 comments ), the damage was done and Twitter was soon ablaze with comments putting him in check.

We’re dropping the video of episode 93 with Young Thug at 7:30 tonight.

Posted by Jessithapromoter at 3:26 AM