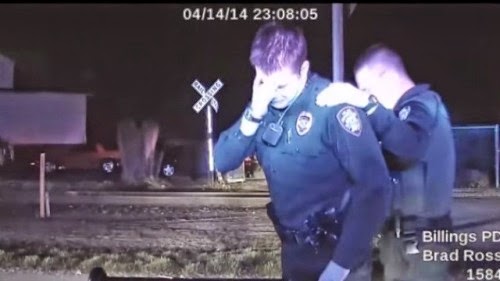 Newly released footage from the scene of an April shooting in Billings, Montana shows Officer Grant Morrison being questioned right after fatally shooting an unarmed robbery suspect. In light of all the scrutiny that police have received over the last several months – what makes this incident stand out is this cop’s unexpected reaction.

On April 14th, Officer Morrison pulled over a car of four people while patrolling Billings’ south side. Although three of the passengers were cooperative, a fourth passenger started moving erratically in the back seat and kept dropping his hand to his waist as if to reach for a weapon.

Ultimately things escalated – culminating in the fatal shooting of 38-year-old Richard Ramirez – a robbery and shooting suspect who was high on meth.On the surface this seems like a routine case of an officer defending himself from a leery suspect. But when Morrison realizes Ramirez is unarmed, he is so distraught he breaks down and begins sobbing right on the side of the road, at one point crying out, “I thought he was going to pull a gun on me.” while a colleague consoles him.

Posted by Gansta Marcus at 7:33 AM