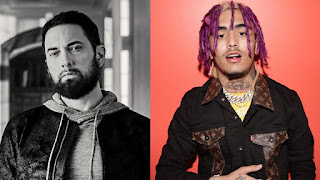 The holidays typically signal a time of spreading peace and joy, but Lil Pump is once again throwing all respectability and common sense out the window to stir up some end-of-year beef with Eminem.

For some reason, the young Florida rapper decided to go after Slim Shady in a new Instagram video. On Christmas Eve, no less.

Back on his bullshit indeed, especially considering the Detroit legend literally just dropped his surprise album Music to Be Murdered By – Side B, which is expected to debut in the No. 3 spot on the Billboard 200 chart. Meanwhile, Pump last made headlines for backing Donald Trump in the 2020 election, despite not being registered to vote. He was also dragged for his "Lil Pimp Big MAGA Steppin" track.

#lilpump calls out #eminem saying that nobody listens to him anymore 😳😳...ya’ll feel Pump on this or nah? pic.twitter.com/vkyM66nvRD

People online quickly clocked Pump’s trolling as opportunistic, hoping Em might shine a spotlight on him in a future diss track. We’ll see if the “Zeus” rapper will waste his time responding to Pump’s disrespect. Although Eminem has yet to say anything, Royce da 5'9" has responded to Lil Pump's diss. "I'll slap them glasses so far off his face, they'll land in a whole nother genre," Royce wrote on IG. "Not cuz I’m mad but just cuz I'm exhausted with all the tuff talk from all these harmless creatures... Enjoy yourself. You actually make money off blatant misappropriation while not being really good at anything."

Posted by Jessithapromoter at 10:59 PM