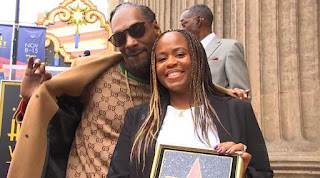 Snoop Dogg will now be referred to as the 2,651st recipient of a star on the Hollywood Walk of Fame. The ceremony took place on Monday (Nov. 19) in the “Gin & Juice” rapper’s home state of California. At the start of his speech, the 47-year-old artist gave praise to Warren G, his family, his wife, and the battle rappers he encountered on his rise to fame.

“Snoop is a multi-talent: rapper, songwriter, record producer, TV host, actor, author, entrepreneur,” Kimmel said before comically adding that Snoop won the Nobel Peace Prize for combining gin and juice. “You crossed over color lines, you crossed over genre lines before almost anyone else in hip-hop did that. You put the O-G in D-O-double-G and I know you won’t remember any of this in half an hour but you’ve been such a good friend to me and I want to say congratulations and thank you.”


Dr. Dre also took to the podium, stating that almost 30 years as partners in music, he and Snoop have developed a bond that extends far beyond the studio. “I had no idea how I was going to do it, how it was going to get done, and them boom, here comes Snoop,” Dre said on putting together his The Chronic album. “A true diamond in the rough. Snoop is just pure raw talent. Nobody sounds like Snoop, and when he opens his mouth you know exactly who it is.”