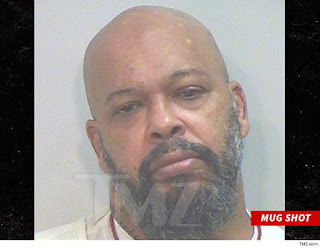 Suge arrived Tuesday at Wasco State Prison and from the looks of his miserable mug shot above, it doesn’t seem like the former music mogul is excited about his new spot.

He’ll have to go through physical and mental examinations and review his records before getting settled at Wasco. Depending on the results he can stay there, or be transferred to another prison.

The jail is in the middle of nowhere in Kern County, and has 400 beds. It’s definitely a stretch in comparison to what the former Death Row Records CEO was used to during his prime, celebrating in Hollywood with the likes of Tupac, Dr. Dre and Snoop Dogg.

Suge Knight took a plea deal last month and was sentenced to 28 years in jail. He got credit for time served, but fortunately for him, due to prison overcrowding, he may be out in about 10 years.
Posted by DJ Sippitakeover at 7:53 AM