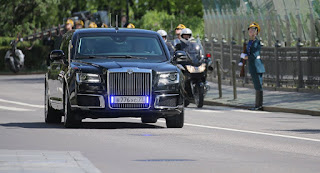 Putin arrived in the Finnish capital on Monday for his first face-to-face with Trump. Amongst the lighter topics of conversation between the two presidents may well be the comparison of their respective state cars: Trump’s Cadillac dubbed ‘The Beast’ and Putin’s Aurus Senat limo.

Russian President Vladimir Putin, who is in Helsinki to meet with US counterpart Donald Trump, is using the occasion to showcase Russia’s new Aurus limo, the state car designed as part of a new luxury brand. 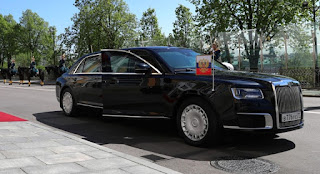 The Russian limos were delivered to Finland last week on an Ilyushin Il-76 transport plane, according to local media. It’s the first public appearance of the Aurus brand outside Russia.

The new car line was developed as part of a project called Kortezh (“motorcade” in Russian). In addition to the limousine, the Aurus line includes a sedan, also called Senat, as well as a minivan named Arsenal, and a 4x4 car called Komendant. The cars are expected to enter the market next year.

Posted by Jessithapromoter at 2:14 PM