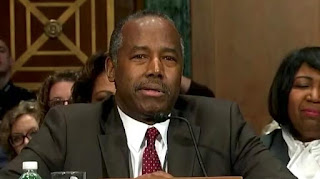 “A comfortable setting…would make somebody want to say: ‘I’ll just stay here. They will take care of me,'” said Carson, while on a trip to visit facilities around some of the down trodden areas of Detroit, Dallas, Miami and Ohio earlier this week. Carson is reported as having made several remarks projecting the need for a downgrade, at one point sarcastically stating that a complex reserved for veterans lacked "only pool tables." He was also cited by the Times reporter as having shown favor for an official at a homeless shelter's account of having "stacked dozens of bunk beds inside," and purposely deprived the quarters of televisions.

“We have some people who are mentally ill. We have some elderly and disabled people. We can’t expect in many cases those people to do a great deal to take care of themselves," Carson is reported as stating, before adding that, “There is another group of people who are able-bodied individuals, and I think we do those people a great disservice when we simply maintain them.”

The remarks have incensed some, who believe that many factors, including the lack of access to transportation, jobs, and resourceful networks in areas that have long been undesirable for business all the while devoid of much of a tax base to fund upstarts, leave many with a long climb and a short rope. Such an outlook, they believe, would only serve to punish those with few choices available to them, and does little to actually address the problems Carson has been tasked with alleviating.

The philosophy behind the approach Housing and Urban Development head Ben Carson is about to take as he embarks on policy for federally subsidized living has been exposed by a New York Times report, which reveals the former Republican presidential candidate having made statements that infer that public housing shouldn't be too comfortable a place to live.
Posted by Gansta Marcus at 3:59 PM