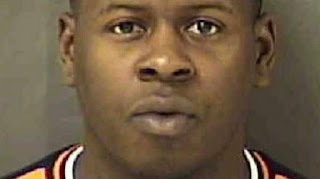 Memphis rapper Blac Youngsta on Tuesday was arrested on felony weapons charges in connection to the Young Dolph shooting in Charlotte during CIAA Weekend. Young Dolph, who was present for the festivities, was on his way to a show when his SUV was lit up with more than 100 rounds of ammunition.

Earlier today [May 16th] Youngsta turned himself into police custody in connection with the shooting, although it is not clear to what extent he was involved. A representative for Youngsta had this to say: "Memphis-based rap artist Blac Youngsta has turned himself in on charges filed in Charlotte NC. The warrants served were based on lyrics from rapper Young Dolph's Bulletproof mixtape. Youngsta will await arraignment while he maintains innocence and no involvement with the incident."

3 charges of "diss weap occ dwell/moving veh," are listed, each with a bond amount of $15,000. Blac Youngsta, given name Sammie Marquez Benson, was arrested in North Carolina.

Posted by Jessithapromoter at 7:37 PM