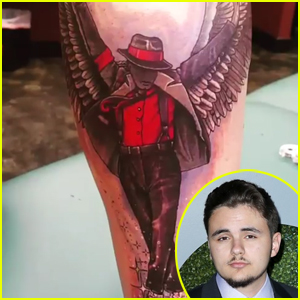 Although it has been almost eight years since the passing of Michael Jackson, that is not stopping people from paying homage to him, including his own child Prince Jackson. Recently, the 20-year-old got a tattoo of his late father on his leg. Prince Jackson posted a video online of the tattoo, which features his father in his signature "Thriller" pose, along with his iconic hat, suspenders, and loafers with sparkly socks. The tattoo is finished off by wings behind the late artist, which symbolize him being an angel. Via a caption on the video, Jackson said "Thanks @dermagraphink for sittin 9hrs with me for such an incredible and beautiful tattoo.

#princejackson shows off tattoo for his dad #michaeljackson
A post shared by VladTV (@vladtv) on Apr 3, 2017 at 8:24am PDT

Posted by Jessithapromoter at 10:03 PM