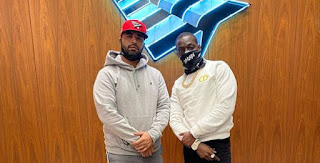 Bobby Shmurda has documented himself enjoying his freedom after serving six years in prison, but fans are still awaiting his version of a "First Day Out" release. Despite recording music while following his strict parole regulations, no new songs have been released because the Brooklyn rapper is reportedly having label issues.

Multiple news outlets report that Bobby Shmurda is negotiating a management deal with Roc Nation but still owes Epic Records his debut album. In addition, Rowdy Rebel is said to have re-signed with Epic after getting dropped during his incarceration.

It's currently unclear if Shmurda is looking to only sign a management deal with Roc Nation or leave Epic altogether. Bobby Shmurda, Epic Records, and Roc Nation have not confirmed or denied the reports.

Posted by Gansta Marcus at 3:37 AM