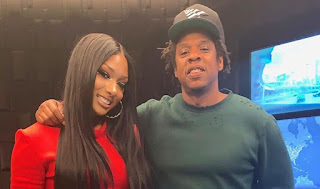 Megan Thee Stallion found herself in controversy with her record label 1501 Records after inking a management deal with Jay-Z’s Roc Nation last year.

1501 Records simultaneously inked a deal with Houston legend, J. Prince. “Carl is from my hood better known as 5th Ward and I’m proud to be his new partner moving forward,” Prince wrote at the time.

Months later, Meg accused 1501 of not allowing her to drop new music because she requested a negotiation of her contract. She also fired off a $1 million lawsuit and a temporary restraining order, which allowed her to drop all the music we heard since.

J. Prince did an interview recently and revealed that he’s scheduled to meet with Hov soon to straighten everything out. “Thanks to the homie Jay-Z…because he and I are about to close that. I’m hoping that we close this week.”

He added, “In the beginning, some things that’s facts where independent labels are concerned. When we ignite and start movements, and it’s been going on since back in the day and probably before me, the majors will come in and try to take your s—. That’s just how it go… Clearly, that’s what was trying to take place where he was concerned. I couldn’t allow it to happen on my watch. We was able to balance that scale and let one know that the homie [Carl Crawford] deserves to be compensated for the risk and different things he took.”

Check out the full interview below:

Posted by Jessithapromoter at 7:28 PM