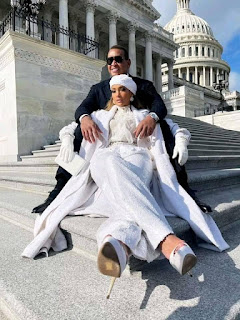 The stars are coming out for the inauguration of Joe Biden as the 46th President of the United States.

Former Presidents Barack Obama, George W. Bush and Bill Clinton will be at the swearing-in ceremony at the U.S. Capitol.

So will former New York Yankees slugger Alex Rodriguez and his fiancée Jennifer Lopez. Lopez arrived in D.C. on Thursday and showed her appreciation for the troops.

Lopez and Rodriguez are among a select group of people in attendance Wednesday. The National Mall in Washington, D.C. is closed to the public as a security precaution following the insurrection by rioters loyal to Donald Trump. Thousands stormed the Capitol two weeks ago in a mob which led to the death of five people.

As a result, Biden’s inauguration will take place before some 25,000 National Guard troops who are assigned to protect our nation’s capital.

Rodriguez will be there, but Trump won’t. The 45th President departed the White House Wednesday morning, holding a rally at Joint Base Andrews before boarding Air Force One for the final time.

Vice President Mike Pence will represent the Trump administration at the inauguration, as Biden is sworn by Chief Justice John Roberts. 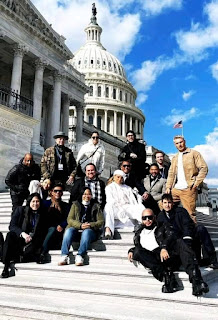 Jennifer Lopez sang at Joe Biden’s inauguration, and her fiancé – former MLB All-Star Alex Rodriguez – had himself a grand ol’ time accompanying her.

Rodriguez documented his day on Instagram, which began with a video of his seat on the Capitol and a selfie wearing a suit that matched the uniform of his former team.

A-Rod was caught on camera several times during the inauguration, and social media had fun pointing out the oddity of seeing him on the stage during such a momentous occasion.

The former shortstop and third baseman for the New York Yankees was spotted next to none other than former President Barrack Obama on Wednesday, prompting some people on Twitter to remark on the “high comedy” of the moment. 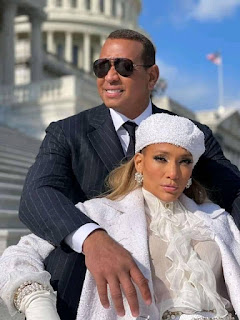 Rodriguez was there to support his fiance Jennifer Lopez, who performed the Woody Guthrie classic “This Land Is Your Land” shortly after Vice President Kamala Harris was sworn in on Wednesday morning.

The cherry on top of Jennifer Lopez‘s performance at Inauguration Day was a sweet kiss from her fiancé, Alex Rodriguez. After singing “This Land Is Your Land” for the crowd gathered on the West Front of the U.S. Capitol, where Joe Biden and Kamala Harris were sworn into office on Jan. 20, Alex was pictured leaning in and giving J.Lo a congratulatory kiss. Alex stuck to safety protocols at the event, though, by keeping his face mask on for the smooch.

J.Lo also delivered a moving message in Spanish at Inauguration Day following her performance. “Una nacion bajo Dios, indivisible, con libertad y justicia para todas,” the singer and actress, who is of Puerto Rican descent, told the limited crowd. In English, this translated to, “One nation, under God, indivisible, with liberty and justice for all.” The statement fell in theme with Biden’s speech about unity as he took his new position as the United States’ commander-in-chief.

Now, fans are just waiting to see J.Lo and A-Rod kiss at the altar. They had originally intended to marry in 2020, but due to the pandemic, their wedding plans were pushed back. All this postponing even made the engaged couple consider not marrying at all, just like fellow Hollywood power couple Kurt Russell and Goldie Hawn; but ultimately, J.Lo said that getting married is “something that maybe is still important to us.” 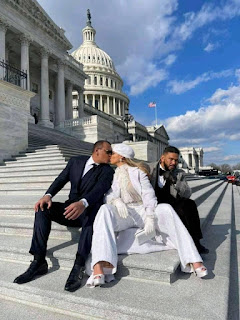 Posted by Jessithapromoter at 9:32 AM