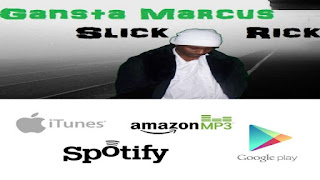 Gansta Marcus has been streaming on digital media since 2010 with a new sound of musical talent. Highly influenced by his own sound, Gansta Marcus stands out on spotify among other unsigned artist.

Gansta Marcus represented a new form of music that had a sound that clashed with music fans from the beginning. Listen to music by Gansta Marcus on Spotify below.

Posted by Jessithapromoter at 2:28 PM