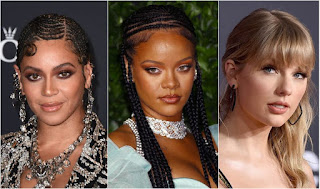 Beyoncé, Rihanna and Taylor Swift are the only music acts included on Forbes’ annual list of The World’s 100 Most Powerful Women, where they’re sharing rarefied air with the likes of Queen Elizabeth II, Oprah Winfrey and Vice-President elect Kamala Harris.

“The leaders on Forbes’ 2020 list of the World’s Most Powerful Women are playing a critical role in determining what the post-pandemic world will look like.” “Their influence is being leveraged beyond economic and political might to transform industries and solve for society’s most urgent issues. The power they hold to move us all forward has never been more apparent — or needed.

Rihanna ranks highest among the singing icons, at No. 69, mostly for her charitable efforts. The$800 million Bajan beauty donated millions of dollars to various charities, including coronavirus relief efforts, and to help abuse victims in L.A. and the needy in New York City. Of course, the “Only Girl in the World” chanteuse is also a business maven, thanks to her Fenty Beauty line and Savage X Fenty lingerie line — expanded through a landmark partnership with LMVH, the French conglomerate, which is at the helm of Dior, Fendi, Givenchy, and Louis Vuitton.

At No. 72, Beyoncé was recognized for her multimedia success as a groundbreaking performer, recording artist, actress and fashion mogul with her relaunched Ivy Park line with Adidas. The business magazine also made mention that the 24-time Grammy Award winner’s husband, JAY-Z, is a billionaire. She’s reportedly worth $250 million.

With a net worth of $365 million, Taylor Swift came in at No. 82. Among the former country singer-turned-pop music sensation’s business profile was the July 2020 “Folklore” album — created and released during quarantine. It’s the first album to sell 1 million units this year.

Winfrey comes in at No. 20 for building her brand into a multi-million-dollar media empire and launching her cable channel, OWN Network, 25.5% of which is worth more than $65 million. The self-made billionaire talk show trailblazer and entrepreneur also acts as a brand ambassador for Weight Watchers after buying a 10% stake of the company in 2015.

Vice-President elect Harris made it to No. 3 on Forbes’ list, just behind Christine Lagarde, head of the European Central Bank.

And the most powerful woman in the world was German chancellor Angela Merkel.

Posted by Jessithapromoter at 3:39 PM