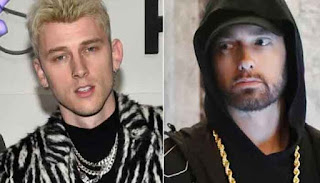 Machine Gun Kelly has reacted strongly to media reports that followed his recent talk with the Interview Magazine.

During his interview, the Cleveland rapper had also discussed his infamous beef with Eminem among many other issues.

MGK admitted that it was his beef with Em that prevented his album "Hotel Diablo" from fulfilling his expectations.

The excerpts of the interview were used by many publications and tabloids under different headlines which the rapper didn't like one bit.

Taking to Twitter on December 1, MGK posted an expletive-laden tweet targeting some 'blogs' for making what he said misleading headlines from 'false narratives'.

While he did not mention any publication, it was evident that he was offended by the headlines which seemed to create the impression that MGK admitted to being destroyed by Eminem in their long running beef.

Posted by Jessithapromoter at 2:42 PM