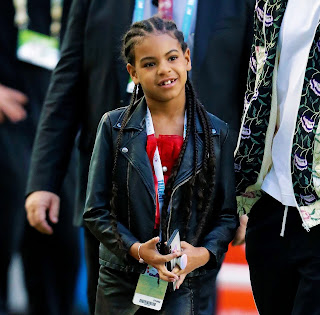 On Friday, it was confirmed that Blue Ivy was nominated in the Best Music Video category for "Brown Skin Girl"—marking her first-ever nomination from the Recording Academy at just 8 years old. The song appeared on The Lion King: The Gift (Deluxe Edition) album and features vocals by Blue Ivy's mom, Beyoncé as well as SAINt JHN and WizKiD. Blue Ivy's contribution is heard in the intro.

Blue Ivy was not listed as a nominee when the nods were announced last month. However, the Recording Academy's website has since been updated to include her name. The "Brown Skinned Girl" visual is up against Future's "Life Is Good" featuring Drake, Anderson .Paak's "Lockdown," Harry Style's "Adore You," and Woodkid's "Goliath."

The 63rd Grammy Awards will take place Jan. 31 at the Staples Center in Los Angeles.

Posted by Jessithapromoter at 4:00 PM