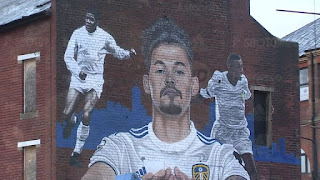 The partnership was unveiled on Saturday in the form of a mural depicting homegrown Leeds and England midfielder Kalvin Phillips, alongside club legends Lucas Radebe and Albert Johanneson, in Leeds city centre.

The mural, painted by street artist Akse P19 - who recently completed a mural of Rashford in Manchester - "proudly honours the diverse heritage of the club" as well as that of minority-owned Roc Nation.

Leeds director of football Victor Orta told Sky Sports News: "Roc Nation is a worldwide brand and has worldwide marketing with their strength in the states and now us here.

"By partnering with them, we feel that we are growing. I feel really happy because now we are showing our ambition in every sense, both on the pitch and off the pitch.

Posted by Gansta Marcus at 3:47 AM