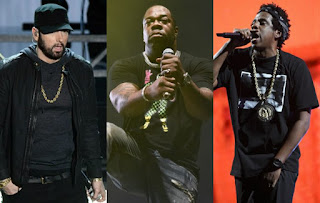 Busta Rhymes has named the likes of Jay-Z and Eminem as potential Verzuz opponents. During a new interview with Complex, Busta was pressed on who he would like to face in the Verzus ring, with T.I. having previously declined a battle against the rapper.

“I would love to spar against anybody,” Busta replied. “As long as their catalogue is a powerful catalogue because I don’t want to do a corny Verzuz.

Busta went on to say that he’d be up for taking on “two artists at the same time” on the show. “I actually presented that before T.I. started talking like that,” he added.

The second season of Verzuz will kick-off next Thursday (November 19), with T.I. set to battle Jeezy in the first episode.

Busta recently recalled losing a high school rap battle to his then fellow student Jay-Z, explaining that he “always wanted to have my rematch”. “It didn’t happen which was fine because I ended up getting my skillset developed to the point where I don’t think nobody want to fuck with a n***a now,” he added.

Busta Rhymes released his latest record, ‘Extinction Level Event 2: The Wrath Of God’, on October 30. In a four-star review, NME wrote: “[The album is] bursting at the seams with ferocious drum patterns, inventive samples […] dazzling wordplay and an all-star cast only Busta could assemble.”

Posted by Gansta Marcus at 2:10 PM