Whats Your Favorite Song From AC/DC? 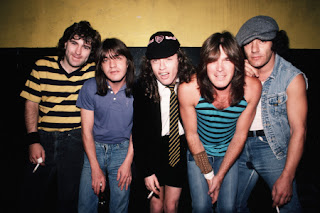 AC/DC are an Australian rock band formed in Sydney in 1973 by Scottish-born brothers Malcolm and Angus Young. Although their music has been variously described as hard rock, blues rock, and heavy metal, the band themselves call it simply "rock and roll".

Malcolm and Angus Young developed the idea for the band's name after their sister, Margaret Young, saw the initials "AC/DC" on a sewing machine. "AC/DC" is an abbreviation meaning "alternating current/direct current" electricity.

AC/DC's mammoth power chord roar became one of the most influential hard rock sounds of the '70s, and is now one of the defining sounds of rock and metal.

The Wrap Up Magazine wants to know what is your favorite song from AC/DC? You can comment your answers below in the comment box.

Fans Favorite has selected this track as there favorite song from AC/DC. Whats yours?

Posted by Jessithapromoter at 8:00 PM