The Insane Lifestyle Of Elton John 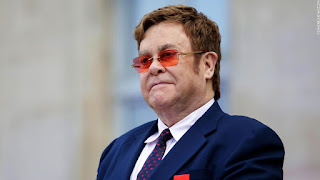 Elton John has had a hugely successful career spanning over 50 years. John got his first break as a singer with his 1969 album Empty Sky, featuring songs by John and Taupin. While that recording failed to catch on, his 1970 self-titled effort featured John's first hit, "Your Song."

John taught himself to play the piano at the age of four. He studied at the London Academy of Music but quit two weeks before graduation to pursue a musical career. When Elton John was working on his new autobiography, the legendary singer, songwriter and performer pulled out diaries he had been keeping for years.

See inside their family life and incredible love story in the video below!

Posted by Jessithapromoter at 5:31 PM