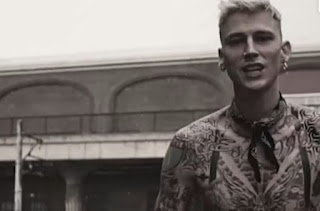 After the Pittsburgh native started rapping his Eminem diss "Rap Devil," an audible portion of the crowd began to boo. Footage of the moment shows Kelly saying "fuck Marshall Mathers" before launching into the song. The crowd at the Amway Center, where MGK was opening for Fall Out Boy, responded with apparent disapproval, interspersed with cheers.

The images, posted on the rapper's Instagram, show him wearing a shirt featuring the cover art for Eminem's "Rap Devil" response, "Killshot," while flipping off the camera as fans in the background raise their middle fingers.

Several comments on MGK's post allege that the rapper was wearing a sweatshirt when he asked fans to flip the bird for an unspecified reason, and that he only unveiled the "Killshot" shirt, featuring an illustration of his man bun, right before snapping the photos.

"Rap Devil," which debuted this week at No. 13 on the Hot 100, was recorded as a response to Eminem's Kamikaze track "Not Alike." Shady's response, "Killshot," released on Friday, compares Machine Gun Kelly to nine-year-old social media phenom Lil Tay and makes fun of the rapper's hair.

Machine Gun Kelly Gets The Motivation He Needs

Posted by DJ Sippitakeover at 5:48 PM