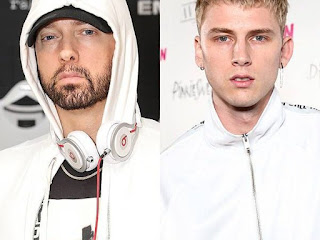 It doesn't look like the beef between Machine Gun Kelly and Eminem is dying down any time soon. After Eminem's diss track targeted at Kelly, "Killshot," MGK dissed the rapper on stage during an Orlando, Fla. concert and taunted him on Instagram.

"Fuck Marshall Mathers," MGK said as he opened his set, according to TMZ. "The real Slim Shady can't stand up," he later shouted, poking fun at the Detroit rapper's age.

He later posted a photo on Instagram wearing the cover art for Em's song "Killshot," with his middle finger up. "He missed," MGK wrote. In the sliding pictures that followed, he also included a screenshot of his original diss track at Eminem, "Rap Devil," still at the No. 1 spot on Apple Music's chart.

Machine Gun Kelly didn't hold back his feelings about the song when it came out, calling it trash and announcing he's prepping a new EP Binge. However, he may be harboring more bad blood than he's letting on, as his security team was accused of beating up an actor who called MGK a "pussy" for bringing up Eminem's daughter.

Posted by DJ Sippitakeover at 4:52 PM