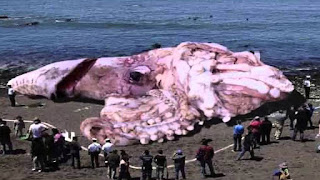 A deep sea monster has surfaced in County Kerry. An extremely rare giant squid, which measures 5.8m (20ft) long, was landed by fishermen off the coast of Dingle on the Coast of Ireland. For the first time in 22 years, a giant squid has turned up in Irish waters. The 5.8-metre (19ft) specimen was hauled up recently by trawl fishermen on the country's southwest coast.
The giant squid is a deep-ocean dwelling squid in the family Architeuthidae. Giant squid can grow to a tremendous size due to deep-sea gigantism. Russian sailors recently came across a massive squid, which they captured on video posted to YouTube. We also did a posting of a giant squid back in 2013 when it was spotted in Tokyo.
CLICK HERE For Giant Squid In Tokyo
Posted by Gansta Marcus at 6:09 PM

Email ThisBlogThis!Share to TwitterShare to FacebookShare to Pinterest
Labels: Places and Things