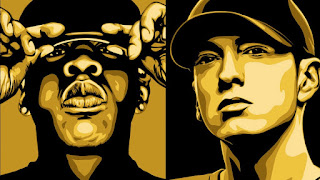 "Renegade" is a song by rapper Jay-Z, which appears as the 12th track on his sixth album The Blueprint. The song is written by Jay-Z, Eminem, and Luis Resto.

Eminem, who is the only guest appearance on the album with rap verses also produced the track. It was originally a collaboration between Eminem and Royce da 5'9" as part of the Bad Meets Evil series, but Royce was later replaced by Jay-Z.

The song is referenced by rapper Nas on his famous diss record Ether made during their highly publicized feud. Nas says to Jay-Z that "Eminem murdered you on your own shit;" stating that he felt Eminem outperformed Jay-Z on Jay's own song.

The song has different meanings to both artists. Jay-Z's two verses deal with his fatherless childhood, and how financial difficulties faced by his mother forced him to sell drugs for survival. On the other hand, Eminem deals with the public perception of his music. At the time, Eminem was at the center of many criticisms due to the content of his lyrics.

Posted by Jessithapromoter at 5:35 AM