How True Was The Movie 'LIFE'? 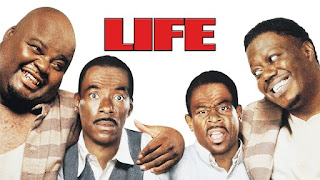 In 1999, The movie LIFE would hit theaters starring Martin Lawrence and Eddie Murphy. The film would touch on a number of things which at times may raise the question on how true the movie was?

The film's format is a story being told by an elderly inmate about two of his friends, Ray (Murphy) and Claude (Lawrence), who are both wrongfully convicted of murder and sentenced to life in prison.

Murphy and Lawrence crafted LIFE into a classic film with their performances. They laid out invaluable truths about friendship, incarceration, hope, intimacy and truth in a work that may have earned more accolades now. LIFE is a movie for the present-day more than it is one for 1999 because we’re re-assessing criminal justice, masculinity, identity and Blackness in a conversation that couldn’t be had when those two stars were at their highest heights.

Posted by Jessithapromoter at 10:52 PM