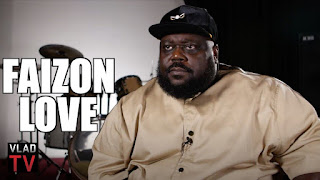 Faizon Love spoke on apologizing to DJ Battlecat, noting they got into an issue in the 1990s, and it separated them for years. They squashed the issues after he reached out to the legendary producer and apologized for whatever issues they had. He noted that he wishes issues went that way instead of the current status quo of rappers and entertainers being senselessly taken out.


From there, Faizon spoke on his comments about Jay-Z’s past life in crime, and if he thought it was true or not.

Posted by Jessithapromoter at 11:58 PM