What If You Had The Chance To Meet AC/DC? 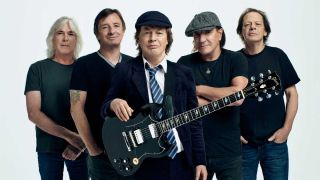 AC/DC is known as one of the greatest rock bands ever, and it's hard to imagine a live sporting event without their music. Brian Johnson is crediting fans for sticking with AC/DC.

I don't think most of their male fans should take them seriously either. And I'm damn sure the band doesn't take itself seriously. AC/DC was formed in 1973 in Sydney, Australia by Malcolm Young. AC/DC have won only one Grammy Award in their career, for the Black Ice song “War Machine” in 2010.

AC/DC's fist ever headline show was at the Melbourne Festival Hall on 4 November, 1975. AC/DC were inducted into the Rock and Roll Hall of Fame on March 10, 2003.

What If you had the chance to meet and greet with the rock band AC/DC? How would you react? What would you do? If you have already met AC/DC, what stories do you have to share with others? Comment your thoughts in the comment section below!

Posted by Gansta Marcus at 2:13 PM