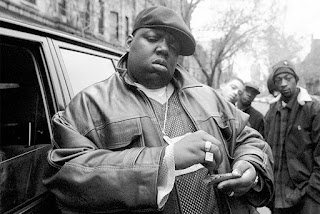 Depeche Mode, Nine Inch Nails, The Notorious B.I.G., T. Rex, Whitney Houston and The Doobie Brothers were all inducted into the Rock & Roll Hall of Fame on Saturday (11/7) during a virtual ceremony that's rewatchable on HBO Max.

Biggie was inducted by his longtime producer and Bad Boy Records label boss Diddy, who said, "Big just wanted to be biggest, he wanted to be the best, he wanted to have influence and impact people in a positive way, and that clearly has been done all over the world. Nobody has come close to the way Biggie sounds, to the way he raps, to the frequency that he hits. Tonight we are inducting the greatest rapper of all time into the Rock and Roll Hall of Fame."

"Big was a brilliant songwriter, he just made movies - almost like Hitchcock," Jay-Z said. "They were these tales that were disturbing, they all had a purpose."

Nas later spoke about how Big helped revolutionized commercially successful rap on the East Coast. "The West Coast, they was sellin’ millions of records, and before Big, I felt like there was only so far New York rap could go as far as sales. Biggie changed all of that."

"I remember when he was doing Life After Death, and he sent me the demo," Jay-Z said. "It was incredible. I was a little worried for myself, as an artist. It's just really unfortunate what happened after that."

"It's one of the most tragic 'what-ifs' in the history of hip hop," Lin-Manuel Miranda said of Biggie's death. "'You never thought that hip hop would take it this far' - how much farther would he have taken it?"

"The human side of him came through in his music, and I think it moved the molecules in the world," Jay-Z said. "I know for a fact that he pointed me in a direction and I’m sure that’s happened to millions and millions of people worldwide."

Watch the full Biggie segment on HBO Max and watch the tribute from his children below.

Posted by Jessithapromoter at 11:54 AM