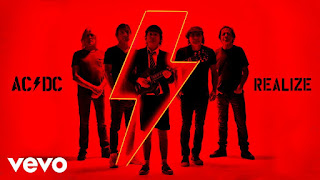 AC/DC has unveiled a second single from its forthcoming 17th studio album, PWR/UP.

With a ceaseless backbeat and wordless refrain, "Realize" is one of AC/DC's hardest-driving tracks in years. You can listen to it via the player above.

The release of "Realize" comes about a month after the Aussie rock legends unveiled their first new single in six years, "Shot in the Dark," which has all the hallmarks of an instant AC/DC classic.

The album was written in tribute to late-AC/DC co-founder Malcolm Young, who retired from the band in 2014 and passed away in 2017.

Angus Young has since explained that each song written for PWR/UP was built from unreleased music he and Malcolm had worked on years earlier. Malcolm's old notebooks were a "guiding force" for the band when it came to finishing incomplete tunes and writing lyrics.

PWR/UP would have arrived earlier this year were it not for the COVID-19 pandemic. Angus told Q104.3 New York's Jim Kerr last month that the band agreed to release it this fall as a way to "boost everyone's spirits."

The band was in rehearsals before the pandemic began prompting governments all over the world to shut down large gatherings until there is a vaccine or a cure for the disease.

While it's unclear how much touring AC/DC planned in support of PWR/UP, bassist Cliff Williams confirmed that he had signed on to do a handful of shows.

Posted by Gansta Marcus at 2:38 PM