Why Is Fans Saying Khloe Kardashian Looks Just Like Beyonce 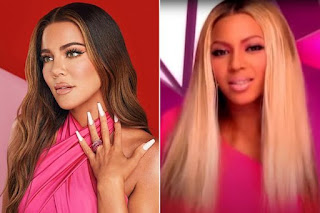 Khloé Kardashian is no stranger to being called out for editing her social media photos, but her most recent series of images are catching attention, not for alleged Photoshopping, but rather her resemblance to another Hollywood A-lister. After the Keeping Up With the Kardashians star took to Instagram with the new images, fans couldn't help but draw comparisons to Beyoncé.

The buzz all started on Monday when Kardashian was announced as the new brand partner with makeup subscription service Ipsy. Sharing a gallery of images in a blog post, which later made their way to Twitter and Instagram, the company said that Kardashian "is the queen of expressing her unique beauty." Ipsy even dubbed Kardashian "the ultimate glam chameleon," which some fans seemed to agree with as they took note of one image in particular that made them do a double-take, many unable to shake the resemblance to Beyoncé.

The post marks just the latest in which fans have claimed the KUWTK star looks virtually unrecognizable. In the past year and more, fans have frequently criticized the vast change in her appearance in the images she shares on social media. She has been slammed for altering photos, and some have even questioned whether she has gone under the knife to change up her look.

While those questions certainly came to the front of the conversation this week, many people were more focused on Kardashian looking like a spitting image of Beyoncé. Keep scrolling to see what fans are saying.

somebody PLEASE tell me why khloe kardashian is doing beyonce cosplay pic.twitter.com/42jLHIt6qP