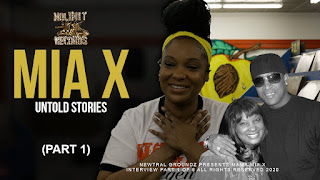 Mia X, is an American rapper, songwriter and actress. She was the first female emcee to get a contract with rapper and entertainment magnate, Master P on his successful record label No Limit Records. She has been called the Mother of Southern Gangsta Rap. She is known for collaborations with several No Limit Records artists, including Master P and Silkk the Shocker on the seminal albums, Ice Cream Man, Ghetto D and Charge It 2 Da Game.

In 2006 in a magazine article her publicist releases a statement of an upcoming cookbook. Before her cookbook she did on online page on instagram #teamwhipdempots. Her cookbook was finally released in 2018. In the 2010s, Mia X was diagnosed with uterine cancer and beat it. In surgery for the cancer, the surgeons accidentally "tore her cornea off", and that left her with 73% vision in one eye.

Mia X and her career are both New Orleans born and raised. In 1984, she joined a local rap group. In 1992, she released a single titled "Ask Them Niggas", which appeared on her 1993 EP titled Da Payback.

In 1994, Mia X signed to fellow rapper Master P's label No Limit Records as a solo artist and also joined Master P's group at the time, TRU, where she experienced national success.[4] She was the first female rapper to be signed by No Limit Records.[5] On November 21, 1995, Mia X released her debut album titled Good Girl Gone Bad,[5] which failed to chart on any of the Billboard charts.

In 1997, she released her first single from her upcoming second album titled "The Party Don't Stop" featuring her CEO and frequent collaborator at the time Master P and Foxy Brown. On June 24, 1997, Mia X released her second album titled Unlady Like;[5] it peaked at No. 21 on the Billboard 200 and No. 11 on the Top R&B/Hip-Hop Albums chart and eventually was certified gold by the RIAA for sales exceeding 500,000 copies.[citation needed]

On October 27, 1998, Mia X released her third album titled Mama Drama; it peaked at No. 7 on the Billboard 200[5] and No. 3 on the Top R&B/Hip-Hop Albums charts, the album would become certified by the RIAA for sales exceeding 500,000 copies only two weeks after release. On September 22, 1999 the album was certified 2x platinum by the RIAA selling 2,800,000 copies in the U.S. After this release, Mia X went on hiatus from the music industry for personal reasons. There were rumors of a third No Limit album from Mia X called 'Sista Stories' in 2000.

Posted by Jessithapromoter at 1:27 AM