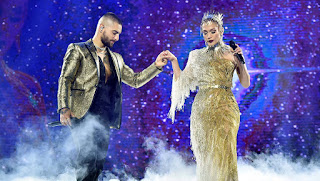 Jennifer Lopez explained how they landed on Maluma to make his big-screen debut in Marry Me, which she also produced with her partner Elaine Goldsmith-Thomas. “Maluma was top of the list,” Lopez said of the search to find the hottest international star, someone who was making music and could possibly act rather than find an actor who could fake being a singer, which “is sometimes not the best.”

As for Jennifer Lopez, she described playing Kat as “cathartic” if not a little meta because the character is a global superstar with many eyes monitoring her search for love. “She’s finding her perfect match but not what people would think is her perfect match,” she said.

The producers found a match for concert sequences in Madison Square Garden in part because Maluma was already scheduled to perform at the iconic New York City venue. So, they made use of the full audience for a sequence that didn’t quite go according to plan due to a technical hiccup. “The teleprompter didn’t work,” Maluma explained. “She came out — this beautiful queen over there. I was like, ‘Let’s do this.’ I was sure it was working but it was off. No one actually noticed.”

Despite the glitch, Jennifer Lopez said “it’s really one of my favorite scenes in the whole movie. It’s very romantic. She’s struggling with where she wants to be, and its filled with complex emotions.”

Cobo then asked the two to explain the significance of having a film like Marry Me, featuring a Latin leading lady, a Latin leading man and Latin music at a time when “it’s been so hard” for Latin artists to breakthrough in Hollywood.

“It’s not common. I’ve been doing movies for 25 years now,” Jennifer Lopez said, adding that she’s made close to 40. “One of the things we wanted to do with this film was to have an international star who could be with me right there to make an album that was bilingual for the first time ever in an English movie. That was a big deal for us. That idea of Hollywood, us making our mark, telling our stories but also just telling a story is super important.”

Lopez said telling human stories was always the goal from the beginning of her career. “I never wanted to be put in a box. I wanted to always be a person. Look at me like I'm a person. Don’t look at me like I’m one type of person, like I’m just a Latin girl over here and I can only do these things. No, I can do anything. You should let me play the president of the United States. I should be able to do that. It’s always been my goal with my career is to show diversity in the different things and characters that I could play.”

That said, Lopez said “everybody knows that I’m the Puerto Rican girl from the Bronx,” and it's an identity that she’s never wanted to or tried to conceal. “I’m proud of that because there’s no reason for that to ever hide. It’s the secret to my success.”

Maluma also credited Lopez for opening a lot of doors for his career and for Latin culture as a whole. “I feel honored and very grateful to Jennifer that she gave me the opportunity. Who is going to think that my first movie would be a Hollywood movie with Owen Wilson and Jennifer Lopez?”

Maluma added that he’s keen to keep acting and about to start looking for another movie. In the meantime, he’s enjoying the pandemic-forced downtime while writing, making music and focusing on his art. “My priority number one right now is to live for my own happiness. I’ve been working so hard that I forget how to live. … I’m so happy right now. I feel balanced.”

As for Lopez, one of the hardest working women in Hollywood who has maintained a breakneck pace over the past few years with all her business ventures from film and TV to fashion and fragrance and recent successes like the Super Bowl performance and the film Hustlers.

“Being home during this time and being with the kids was really a special time. We got to do things we never get to do,” she said, then serving a reminder to other artists to take your time with creative pursuits. “It made me realize that it’s not going to go away. I think one of the fears of a lot of artists and performers is that if I stop, it’s going to go away. It doesn’t. You need to believe and have a little bit more faith in yourself than that and know that when you’re ready to put out the next album — even if it takes two years — it’s OK. Everything has its time. You have to take time for the things that matter.”

Watch the full conversation below.

Posted by Jessithapromoter at 1:47 AM