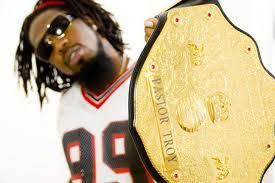 New interview with the Atlanta/Augusta, GA's legend himself Pastor Troy that's known with hits like We Ready, Throw It Up Ft Lil Jon and also that's known with the legendary hit No More Play In GA a known song that's a dissed to Master P and The No Limit Soilders Movement.
This is an  interview where Pastor speaks on the reason for the diss track to Master P, the influence of  Crunk rap and him bringing the gangsta rap style to Atlanta.