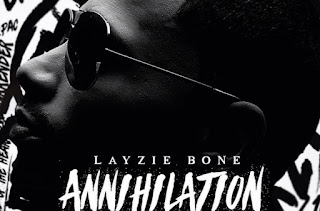 Layzie Bone has decided to double down with a music video for his track "Annihilation." The track was a follow-up to “Let Me Go Migo” that was released on Christmas Day, and finds Layzie addressing Migos directly with his patented delivery throughout the record.

Back in December, Bone Thugs and Migos were embroiled in a heated debate regarding who's the greatest hip-hop group of all time. Meanwhile, throughout the video Layzie can be seen tying up somebody with long dreads, thus leading many to point out that it resembles Offset of Migos.

Layzie also noted that Annihilation is the lead single off his new album of the same name, to be released April 19th prior to multiple new singles from Bone Thugs N Harmony throughout the year.

Posted by Jessithapromoter at 8:07 PM