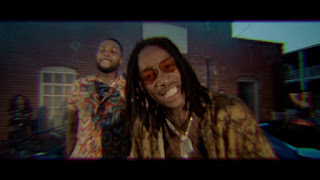 Wiz Khalifa decides to turn the club up with his new music video 'Blue Hunnids.' Wiz Khalifa delivers a new video, and this one includes a tribute to the late Jimmy Wopo, a Pittsburgh rapper who was shot and killed this past June.

In the video, which includes Wopo footage from visuals the rapper dropped while he was alive, Wiz and Hardo bounce everywhere from the club to the studio. In some clips, we see the two rappers post up in a night spot as baddies float around the scene.

Posted by Jessithapromoter at 2:46 PM