Introducing The Robotic Finger By MobiLimb 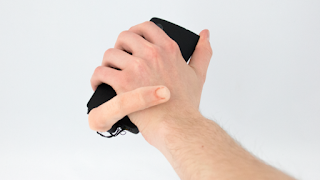 I'm kind of scared of the design and the way it looks.

Besides loving on you, the MobiLimb can move up and down to get your attention when you have a notification, serve as a kickstand to hold your phone upright, or act as a handle if you want to carry your device around like a shield. It can also "simulate personality and emotions such as curiosity" to entertain you, allow your device to move independently by clawing its way forward, and even hold a pen and draw a heart.

The researchers have designed several different textures for the MobiLimb, including a "classic robotic shell," another made of fur, and a third with realistic "finger-like" skin made of silicon.

"Using a humanlike skin with the phone illustrates changes the perception of the mobile device from an inanimate object to an 'almost' human entity," Teyssier wrote.