Why Is Eminem Scared To Diss Drake? 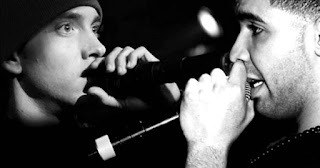 Even though Eminem has released the most talked about album of the year, Em has owned up to most of his shots fired. Although he is denying dissing Drake on the Joyner Lucas-assisted track "Lucky You."

Eminem ruffled a lot of feathers with his Kamikaze album, where he doesn't hold any punches, dissing several rappers and media personalities.

Of course, anytime a ghostwriter is brought up in rap songs, the assumption is Drake is the target. According to Em, that is not the case here. In the fourth part of his interview with Sway Colloway, Eminem opened up about the speculation.

"Drake is going to always be in my good graces, because he did something for one of my daughters that I will never forget and he will always be in my graces for that," Em noted. "And I like Drake. What I'm telling you with these lines is, I don't know what's real and what's not, at this point. Because you hear shit about this rapper, that rapper, whatever. I'm telling you that I don't do it. Never have and never will. If I ever need a ghostwriter, I need to just fucking put the mic down."

Posted by Jessithapromoter at 11:04 PM