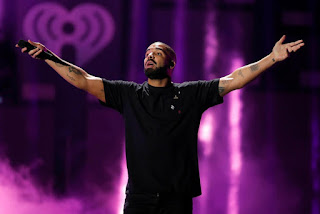 Drake’s Scorpion is skyrocketing on the music charts and shattering Apple Music records, including becoming the number one album on the Apple Music charts in 92 different countries almost instantaneously and becoming the fastest-growing album ever on the service.

Drizzy’s fifth studio album garnered more than 170 million streams on Apple Music. 10 of the most-streamed songs on the service came from Scorpion, which not only broke Drake’s own record, it was the most streams in a 24 hour period on any streaming service ever.

More Life previously held the record with 89.9 million streams in a day. What’s your favorite song on Scorpion?
Posted by Jessithapromoter at 10:18 AM