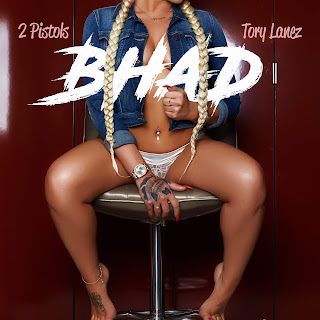 The artist 2 Pistols has been a known name in the music industry since his chart topping hit "She Got It" which featured T-Pain nearly 10 years ago. After a run with Cash Money Records and as an Indy artist 2P took a step back from music to dive into the cash crop of legal marijuana cultivation launching his company InhaleUSA which specializes in growing premium bud, as well as THC & CBD vape pens.

Now that InhaleUSA is booming in the legal markets he has been targeting, Pistols has come back to his first love MUSIC with a new release called "BHAD" featuring international superstar Tory Lanez. On "BHAD" Pistols gets back to his dirt talk, bedroom raps for females he has major success with in the past with "She Got It" & "Lights Down Low".

This record will sure be a streaming HIT for the masses this summer. Look for the official video of "BHAD" as well as more new music to be released in the near future.

Posted by Gansta Marcus at 1:29 PM