Hit song maker Baby Bash, whose numerous hit songs include: “Suga Suga”, “Cyclone” and “Baby Im Back” with others will now be searching for the next big singing star. The popular artist has also written hit songs for Pitbull and Jennifer Lopez (J Lo). Baby Bash will work with personally selected artist’s one on one in the studio on producing and recording a song for the artists.
The one on one time and production is being brought to you by Hood and Associates, a record company out of Orange County, California who is a collaborative label with Baby Bash for several years. Baby Bash has recently begun producing the labels artist Lil Nate Dogg (Son of 4 time Grammy nominee Nate Dogg) on the song “Son of a G” in which Baby Bash also features as well as Sen Dog of the iconic rap group Cypress Hill.

Bash also recently released the song “California Sunshine” which features Lil Nate Dogg and YCGQ, another group on the Hood and Associates record imprint. The label has also released “Back It Up” song by Baby Bash with legendary producer Mally Mall (Drake, Justin Bieber, Migos {bad and Boujee song 2017 #1 hit song}, and French Montana) and new up and coming artist Jus.

Some selected talent that has worked with Baby Bash could also be selected to work with Mally Mall. Baby Bash will first start in his hometown of Houston, Texas scouring the area for new talent. He will then branch out across the United States to seek the next big music star.

Now Hood and Associates has teamed with Baby Bash and other well known artists and producers to bring up and coming artist’s closer to their dream by affording them the opportunity to submit their talent in any way shape or form to the budding record label. Their official website is

The label is also said to be filming all of the submissions, in studio production and recording sessions, and preparations for an upcoming reality TV show as well. Up and coming artists can submit their music by following the instructions on the flier below. To be considered to be on the reality show with Baby Bash you must have worked on at least 2 songs with Baby Bash.

Talent wishing to work with Baby Bash and wishing to be on the reality TV show can submit by:
Send a 30 second promo of your singing, rapping or band with your: name, city and state, phone # and email address to Justin@hoodandtalent.com . The contest is all ages. 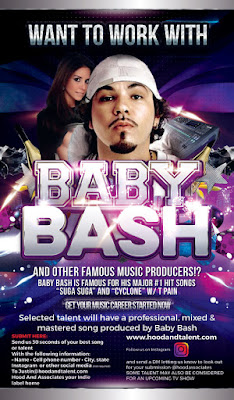 Posted by DJ Sippitakeover at 8:09 PM